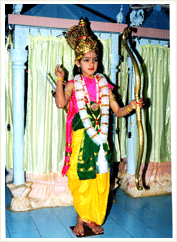 Much in depth, he has EARDDAA-based physics. Only the rare one who can read himself as non-physical-based entity, can read the non-physical entity in the physics of the universe/uni-verse.

Apple was falling down even before Newton observed it. It became science only on the observation of Newton. Thus, it infers that science is an observation, a non-physical intelligence. Science is not mere physics. As such, science should be studied and understood not merely physically, by mere study and understanding of physics, but by the study of the intellect behind it, the non-physical entity, and the origin of such an intellect, along with its effulgence, the EARDDAA, i.e, by the Study of the SELF,  science should be studied and understood. 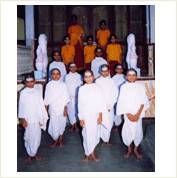 derstanding was aimed at teaching school and college students along with other subjects General Science, Mathematics, Social Studies etc. The aim of the curriculum is to build up the students as SAINT-cum-SCIENTISTS. Their class books were re-written with enrichment in SELF-Study. A school was run in the premises of this Matha, for three years with this enrichment in SELF-Study in all the subjects, from class VI. The school was named of . It means and indicates a school of study which is not noted by the objective subjects, but by the study of SELF on the lines of building conduct and to climb up to the abode of eternity.

Observation and inference of SriiKrshnaananda Paraavidyaa Piitha SKPP / SriiKrshnaananda Matha SKM is that the society and the parents are yet to rise to be convinced on self-education for themselves for their elevation as also to allow their children to undergo curriculum of self-education. Self is  Consciousness of EARDDAA, the absolute subjectivity unaided and free from any external entity, an absolute non-physical identification. The reality of Self is Reality  for identification of Self and also the Reality Base for other entities as mundane, illusion, hypocrisy, ego etc.  Men behave in these other entities free from the Reality Base. Lack of recognition for this truth prevents this institution to progress. SKPP/SKM  aims and expects  elevation from the society and the parents to reach the depth and sophistication  of the  Reality Base purely as the Non-Physical Base for the physical concepts.

The concept    of Paraaviḍyaa    started with the publication     SCIENCE and SPIRIT     which was released from this  Matha  in April 1995. The exposition was such  that the subject matter  of the book was  AN UPANISHAḌ of SCIENCE, A SCIENCE OF THE SELF Vision of the non-physical SELF was the aim of the exposition. It started with the question WHO AM I ? AM I THE BODY? It was discussed in general, in the beginning. Later, in the light of the human physiology and anatomy, the subject was dealt with at length. As the conscious cosmos, the human body exhibits superior non-physical features, over every physical feature. Every organ of the human body contributes to the greater elevation of the SELF than to the entity as a physical body. These highlights were discussed in the book.

The external cosmos including the Space and the Solar system was discussed in the light of the analysis of SELF, to highlight the non-physical base.     The scientific data   was compared with   the relevant projection of the astronomers  of the Hinduu Philosophy to throw  light on the non-physical base.

The Subject-Based-Consciousness SBC of the SELF (the non-physical entity) was discussed, comparing with the projections of the literature of Hinduu philosophy. The Projections Brahman, Naaraayaṇa, Vishṇu, Śiva, Sarasvaṭii, Lakshmii, Paarvaṭii and others are characteristic of the SBC. This fact is discussed at length. The post Big-Bang event was compared both pictorially and discriminatively for the purpose of comprehension of SBC. The cosmic Human Form was explained where in the said fourteen Looka are due for SBC of the man.

Measurement of time of the universe/uni-verse was discussed, comparing the scientific data and the detailed Virtue-Based order of calculation of time as projected in Bhaagavaṭam and other scriptures. It was shown that the Virtue-Based calculation was more scientific and sophisticated.

Theory of Rebirth, Purpose of the universe/uni-verse were discussed in detail. Energy is not simply capacity to do work as defined by the scientist. It is defined, narrated with practical evidence characteristically, in the SBC of the man.

(1) the opinion of the atomic physicists that the world is not separately and independently existing parts, but a complicated web of relations between the various parts of a unified whole,

(2) the opinion of J.A.Wheeler that the universe is a participatory universe,

(3) the opinion of Robert Oppenheimer on the movement of electron,

(4) the confirmation of the modern physics in the basic ideas of Eastern mysticism,

these five opinions are discussed at length. The maxims of SBC over OBC proving the SELF in the non-physical experience has been clearly seen in the discussion.

Chapter thirty four is an interesting chapter on the gravitational balancing of / by Existence-Knowledge-Bliss in the SBC.

In the chapter thirty five the question What is Earth? What for is Earth? in the two sequences

(1) the work-based existence, and (2) the existence-based work were examined at length. The earth is analogous to the man’s plane of SBC. This truth is discussed in detail.

SELF-Analysis was the last chapter. The element of Existence which is realised steadily in the SBC, is debated in the OBC owing to lack of introspection. The SELF-Analysis was discussed in the light of the pre-universe entity Saṭ Existence and the post-universe entities  Ciṭ - Aananḍa. The ship sails, survives and attracts by its design-criterion-base as the density difference with water, but not by its magnitudes like the various amenities. This is an example. The man and the universe/uni-verse are balanced not by external/physical magnitudes. They are balanced by SBC. Thus, the reader is drawn to the importance on SELF-Analysis.

The class books of VI and VII classes of the syllabus of the Government of Andhra Pradesa, on the subjects General Science, Mathematics and Social Studies were rewritten with enrichment by Aḍhyaaṭmaviḍya (SELF-Education). In every item of each chapter in all the subjects, it may be observed that the intelligence on SELF-Education, the non-physical entity can present science better than the 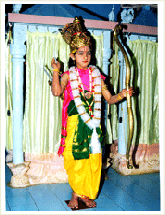 present scientist can see it or do it. This is because intellige

nce is synthesised and synchronised with the SELF, the non-physical entity. This is an unique exposition attracting the attention of even the tiny students of classes VI and VII.

The IQ (Intelligence Quality) of the children was elevated from normal to super normal levels, much beyond the students of senior classes in the society. In addition, they were taught Samskrṭa. However, the school could not be run beyond 3 years for want of campus space, amenities and financial resources.

The school is proposed to be continued in a new spacious premises, at any time, by the blessing of the Lord in its sophisticated format. We have a source for this purpose  in Mora

adesa, India. Alternative sources are under study for the purpose. The aptitude of the children was studied in the earlier school. It was aimed to attract them in this curriculum of education. A gigantic Krshṇa-Arjuna Raṭham Chariot of wheels with 20 feet in diameter has been constructed. Building for Research Center for SELF-Study is constructed. Proposals are getting ready to run the school again in a new campus. The target and ultimate event of the activities of SKPP/SKM is to materialise the educational wing. At present the educational wing is functioning through  You Tube  https://www.youtube.com/c/humanlights1.