e Saṃskrṭa, is the most ancient language, of the origin of the universe/uni-verse. Veeḍa emanated in the truth-spirit of the universe/uni-verse, which is a non-physical entity. It is subtle and due only for subtle comprehension, beyond physical/objective perspective. The language Saṃskrṭa emanated through Veeḍa, as the language for Veeḍa. Later, Maharshis Paaṇini, Paṭaỵjali and others have computed and composed the grammar for Saṃskrṭa, so as to expound in equal measure the truth and the pious presentation  of Veeḍa.

It is not an exaggeration to say that this computation is of the greater order than the present computer knowledge, being a computation of the non-physical entity.

However, this language has been adapted for usages other than the expositions of Vaiḍika truth. Thus, the use of the language was limited. This resulted in expositions damaging the exalted truth /Ḍharma of the Hinduu order, of the Vaiḍika order.

A Saṃskrṭa Pandiṭa Mahaasammeeḷanamu was organised on 16-11-2008. About 40 Saṃskrṭa Scholars attended, while about another 20 scholars were associated. The difference created by limited following of the grammar of the language was explained. This was appreciated in the true spirit. It was agreed to work more on the issue collectively by the scholars in association with this Matha, and to keep up grammar to speak the Vaiḍika  truths.

This event was unique of its nature where the said difference was not debated.

This Matha has published and released a series of expositions on various texts, on the event,  including the authority on the language being based on Vaiḍika  truth, including the seed of the universe/uni-verse as given in Rgveeḍa. These under-mentioned  texts —

proved that the text are pious in the true spirits of Veeḍa, while they were being expounded damaging the truth, a few of them causing immense damage.

— Chariot of Krshna-Arjuna with meals of 20 feet diameter,

height of Krshna and Arjuna seated in the

Chariot are of 12 feet

and Hanuman on the flag of 4 feet,

leaf of Ficus Indica and a 14 feet idol of Vishnu lying on the leaf,

The pond is maintained full of lotus flowers growing in the water.

There are many more idols erected depicting the truth of the

— A center  for research on subjective education, a double storied building with a

four faced prism at the center with flute blowing Krshna sculptured on each of the four faces.

Preaching boards are erected through out the campus and Preaching

displays through out the compound wall in and out, in such a way that at any

spot in the campus one can meet a Preaching all around him.

3.      SriiKrshnaananda Matha  completed 50 years of its activities after construction of a building for its activities at Hyderabad in the year 1967. This  institution celebrated Golden Jubilee in the year 2017. Over this event a programme on Human  Correlation was organaised  for 3 Days in March 2017,at its Branch. A number of Saints participated and rendered  their spiritual messages. Following this, Giitaa-Havana-Yajyna was conducted at the same branch for 3 days.  Disciplined observance of yajyna was strictly followed in line with the Self-Discipline. These programmes  were placed in the Youtube of this institution (https://www.youtube.com/c/humanlights1).

4.       https://www.youtube.com/c/humanlights1  Was commissioned on  20 May, 2016. A series of Discourses were uploaded  till date on subjects mentioned in the framed flow chart against the aim of the commissioning of YouTube, in Telugu, Tamizh, Kannada, Hindii and English Languages. This aim is  aimed at meeting through an Educational Wing of SriiKrshnaananda Matha, under the banner International Institute of Research on Education by Human Lights. 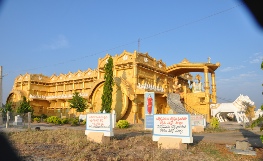 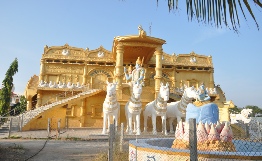 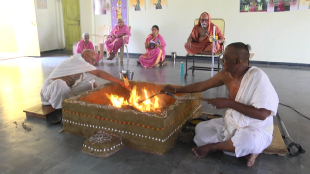 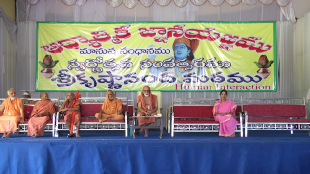